About
▾
Programme Projects Partners Supporters Reports
Events
News
Gallery
▾
Photos Videos
Grant Scheme
▾
About Grant Scheme How to Apply Projects Supported
Library
▾
Research Resources
Map Widget
Contacts
Media About Us
Enter the required details. You will get the code for the widget of the events map
which you can put on your website.
Widget Embed Code
Library » Resources

Download PDF
Armenian Architects of Istanbul in the Era of Westernization
04.08.2014
Hrant Dink Foundation Publications has released a book on the contributions of the Armenian architects in the shaping of Istanbul in the 19th and the early 20th century. The virtual exhibition can be visited at www.archmuseum.org.
Hrant Dink Foundation Publications - December 2010

Download PDF
Turkey-Armenia Manual
04.08.2014
The manual, developed by the European Stability Initiative with the support of the EPF and USAID, contains information and contacts on both Turkey and Armenia to introduce key people and institutions to journalists and NGOs from Armenia and Turkey that want to write about or advocate their issues in the neighbouring country.
August 2010

Download PDF
Habap Fountains: The Story of a Restoration
04.08.2014
Armenian, Kurdish and Turkish people work together to renovate two destroyed fountains which were built by local Armenian people hundreds of years ago in a village of Eastern Anatolia. The film follows the story of Fethiye Çetin, an acclaimed lawyer and author, who tells the story of her Armenian grandmother, born in the same village, in her famous book My Grandmother. This project and the renovation of these fountains are regarded as a milestone in the issue of "facing past" in Turkey's current political conjuncture.
Directed by Dilek Aydın - Produced by Hrant Dink Foundation - November 2012

Download PDF
Speaking to One Another: Personal Memories of the Past in Armenia and Turkey
04.08.2014
The book is a product of the research project, “Adult Education and Oral History Contributing to Armenian-Turkish Reconciliation” conducted between August 2009 and February 2010 in various locations in Armenia and Turkey.
Leyla Neyzi & Hranush Kharatyan-Araqelyan
dvv international - 2010

Download PDF
Armenian Voices of İstanbul
04.08.2014
The essays compiled in this book are based on oral history research among the Armenians of Istanbul. The narratives are summarized in six essays that reflect on different aspects of Istanbul Armenians' life. We hope that the publication will increase awareness about Istanbul Armenians both in Armenian and Turkish societies and will encourage further dialogue between the two countries.
dvv international - 2011

Download PDF
Armenia-Turkey: Youth Bank as a space for Dialogue
04.08.2014
Implemented by the Eurasia Partnership Foundation in partnership with the Toplum Gönüllüleri Vakfı within the framework of the Support to Armenia-Turkey Rapprochement Project Funded by USAID, 2012 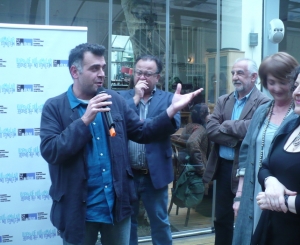